Some medical providers broaden their skills through extra schooling or classes, but Paul Brown, PA-C, chose to further his skills in trauma care by working in the heart of emergency medicine – the military. Since joining Horizon Health Care’s James Valley Community Health Center in 2014, Brown has provided primary care for a diverse number of rural patients in the area. In 2019, he combined his passion for medical care with his desire to learn military principles and joined the South Dakota Army National Guard.

“If there’s trauma or critical kinds of patients that come into the clinic, we usually just push them off to the ER,” said Brown. “By joining the National Guard, I wanted to make myself a more well-rounded medical provider.”

During his physician assistant program, Brown served a few rotations at Fort Stewart, a military base in Georgia. He got a glimpse into the military life and how it could increase his skills as a medical provider. Brown was direct commissioned so the National Guard could utilize his skill set right away. For initial training, he was sent to Fort Sill in Oklahoma for one month for the Direct Commission Course and to Fort San Houston in Texas for another month for the Basic Officers Leader Course (BOLC). 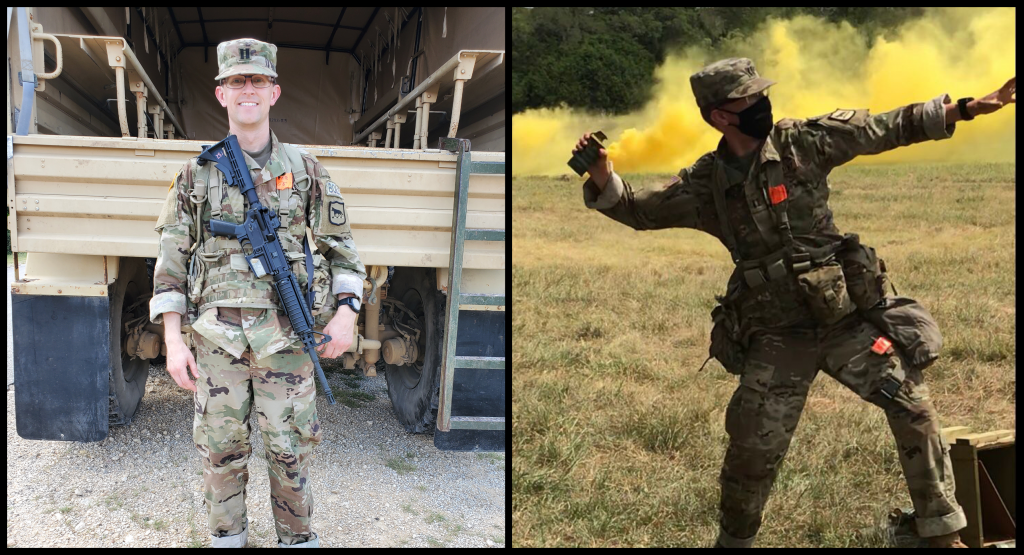 “I had only fired a weapon a couple of times before joining the National Guard, but I had the desire to train and serve and learn about the military side of things,” said Brown. “I thought it would be a good way to learn how to fire a weapon, to learn about leadership, and to do a number of things that would typically, in the past, make me uncomfortable.”

During the month at the Direct Commission Course, he experienced a lighter version of boot camp – sleeping in barracks, getting up at all hours, going through a gas chamber, ruck marching, shooting at the range, and learning about drill and ceremony.

“On the enlisted side, they have a harsher, more uptight kind of training, but for the medical Direct Commission Officers, they are kinder to us. Every unit is different, just like every medical clinic is different,” said Brown. “It was a lot of really early mornings, but it was pretty normal for how they operate.”

After receiving training on military disciplines, he moved on to administrative medical training in the military. Through his BOLC training, he learned the Army’s “roles of care” – (1) unit-level medical care, (2) advanced trauma care, (3) military treatment facility care, and (4) hospital care.

“The first two roles are what you think of as a little tent hospital. Those are more temporary, where you see patients in from their initial trauma out in the field or sick call, which would be basic acute care for a sore throat,” said Brown. “[As the medical provider] you try to either put them back out in the field or move them up in the roles of care.”

Brown is currently a Captain with the 730th MCAS (Medical Company Area Support) based in Vermillion, South Dakota. The MCAs unit is equipped to perform role 1 and role 2 care and CBRN operations with decontamination of soldiers who have Chemical, Biologic, Radiologic, or Nuclear exposure. Since BOLC training in August, he has been utilized for various duties, including leading a vaccination mission as the Officer in Charge (OIC) and performing discussions with soldiers regarding COVID-19. After joining the National Guard, he has worked to further his knowledge by initially obtaining certifications in ACLS (Advanced Cardiac Life Support), PALS (Pediatric Advanced Life Support), and ATLS (Advanced Trauma Life Support). He hopes to further his advanced studies through some of the courses available to military PAs.

As an active-duty PA, there’s always the chance he could be deployed, but Brown said, “Typically deployment for medical providers is limited from six to nine months, and then the Army may rotate someone else in. You have your patients that, if you leave for many months, the military recognizes that they might go away.”

Although he’s only participated in a few trainings so far, he had to leave his wife, Katie, and their kids behind when he left. As a full-time veterinarian, his wife has juggled work and taking care of their foster kids and toddler at home.

But even through the sacrifices Brown and his family have had to make, he and his wife see the benefit both in his current practice and in the mission field. After previous trips to Rwanda for mission work with his wife, Brown hopes to utilize the trauma care he’s learned from the military to potentially help in Rwanda next time they go back.

“Joining the National Guard has put me in situations in which I would typically be uncomfortable, which is good,” said Brown. “I should learn from those situations, and I hope to keep stepping out of my comfort zone while I advance my studies as a medical provider.”