Changing kids’ lives – one book at a time 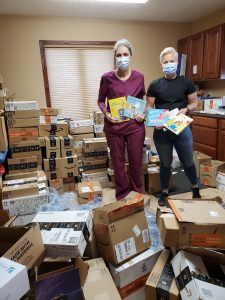 After the closure of a local program that provided books for kids in northwest South Dakota, Horizon Health Care provider Alex Bachman-Williams, PA-C, made one small decision that grew to be a worldwide book-donating initiative.

It all started with a video. Williams posted a Tik Tok video asking for book donations for kids at the Family Health Center of Eagle Butte, located on the Cheyenne River Sioux Tribe.

“There’s a big push for literacy on the reservations,” said Williams. “Otherwise those kids might not get books.”

With her posts on Tik Tok averaging a few thousand likes, she hoped that people would rally together to donate books and make a difference in the kids’ lives. Her hopes were blown out of the water when the post received 68,000 views, 9,000 likes, 1,600 comments, and shared almost 700 times. Contributions showed up from all over the world – Minneapolis, Texas, Pennsylvania, Canada, Australia, Europe, and more.

The first day, 180 boxes showed up on the clinic’s doorstep. The second day, 300 boxes were delivered. The third day, over 680 boxes arrived. Williams current box count stands at 1,800, with more boxes still being delivered. That’s 3,000 to 4,000 books collected – all for the kids in their communities.

“I’m completely overwhelmed with humanity,” said Williams. “We see so many bad things through social media and the pandemic, but this is a glimmer of how good people are.”

Originally set for ages 10 and under, the ask grew to include books for teens as well. Williams plans to create a loaner library at the clinic so older kids can swap out books they want.

The donated books include a variety of fun and learning. Book topics include consent, different cultures and ethnicities, LGBTQ+ families, and even books about Native Australian tribes. In addition, the clinic received coloring books for their lobby to entertain kids while they wait for appointments.

“It’s about the kids,” said Williams. “We have a kid who’s obsessed with dinosaurs. Someone donated a dinosaur book, and when he saw it, he almost teared up.”

People continued to support local causes by buying books from indigenous-owned bookstores and local businesses. With the overwhelming response, Williams began sharing books with other Horizon clinics in the northwest and southwest to provide literacy for neighboring reservations.

From the bottom of her heart, Williams wants to thank everyone who contributed – including those who shared the video, spread the word, donated books, and unpacked books to provide for the kids.